We asked them all about their plans for the festive season, which is fast approaching... you know, in case you hadn't already noticed. It seems as though fewer people are planning to jet off into the sunset this Christmas, despite an increase in 2015. This year, the number has even fallen below the 2014 figure. 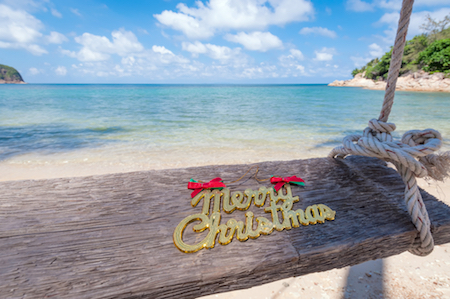 2% of Britons Plan To Be On Holiday for Christmas Day

We initially asked respondents whether or not they planned to be on holiday over Christmas day this year and any of the surrounding dates (out of the country), to which just 2% of the people we polled said 'yes'.

To compare that to previous years, 8% of the respondents to our 2015 poll said that they would be spending Christmas Day abroad on holiday; up from 4% in 2014. So, whilst the number of people spending Christmas Day on holiday doubled last year, it has fallen to the lowest number in three years now. We asked those who were planning to be abroad on holiday for Christmas Day 2016 who they'd be going with, to which 36% said 'just my partner', 16% said 'my friends', 12% said 'my partner and children' and 9% said 'relatives'.

41% of the people spending Christmas Day 2016 on holiday told us they had planned to do so in order to 'escape family' and 23% admitted it was to 'avoid present buying' for other people. Next, we asked the other respondents why they wouldn't spend Christmas Day abroad, stating as many reasons as they wanted, to which the top answers were as follows:

We asked those who were spending this Christmas on holiday where they were heading, to which the 'Canary Islands' (13%), 'Caribbean' (11%) and 'Mexico' (10%) were the top three answers.

For one reason or another, fewer and fewer people are choosing to spend the festivities on the beach with a cocktail in hand, but it's still a preference for some. We have to admit, whilst it might seem odd to wake up to beaming sunshine and warm temperatures on Christmas morning, the idea is a tempting one...
Trustpilot
ATOL Protected
£1 Hotel deposits
£30pp Holiday deposits