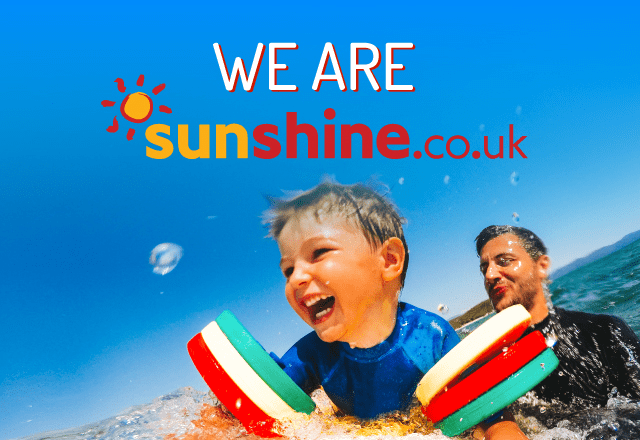 The sun always shines in the UAE, its natural desert climate and its convenient location in the Arabian Gulf has enabled this to give you warm waters and brilliant beaches.

Trade and tourism is encouraged, so this makes for the ultimate shopping destination.

In the United Arab Emirates the sun shines all year round, a popular and the best time to visit is during the winter season when temperatures are moderate with daytime temperatures averaging at 78ºF (26ºC) and 60ºF (16ºC) at night. The summer months are uncomfortable with high humidity levels and temperatures peaking at 122ºF (50ºC).

What to wear in the United Arab Emirates?
Lightweight summer clothing is suitable for most of the year, with jackets or sweaters possibly needed in the evenings of winter months. It's important to dress appropriately when in public and women should avoid wearing anything considered to be revealing, such as low-cut tops/dresses, tight shirts and very short shorts, dresses or skirts. Men should always wear a shirt or top in public. By the pool or on the beach, swim-trunks, swimsuits and bikinis are acceptable. 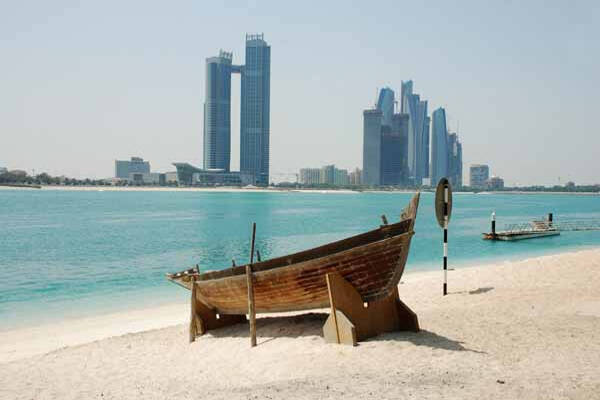 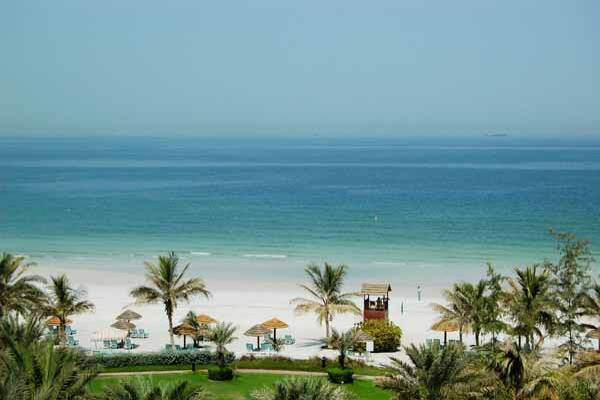 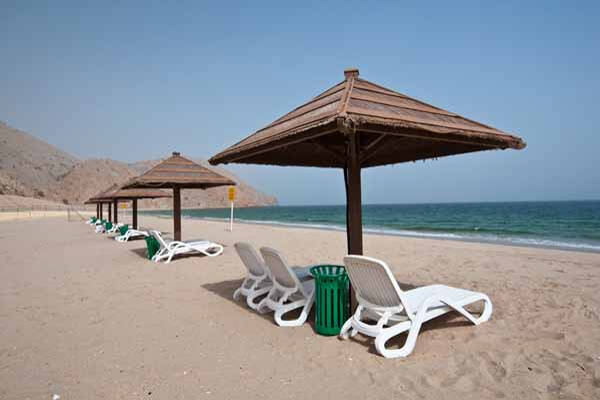 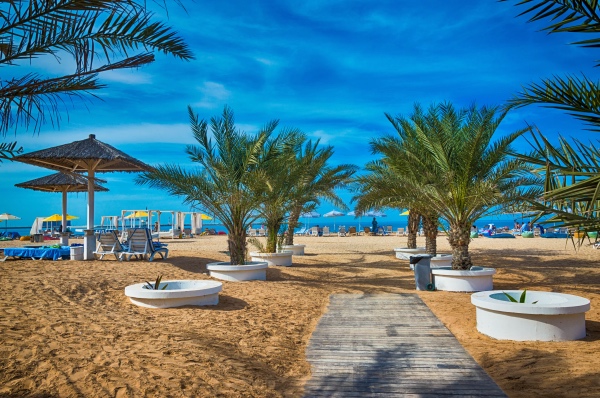 The seven emirates of the UAE (United Arab Emirates) offers a contrasting environment of gleaming shopping malls and hotels, a culture rich in tradition and all the entertainment facilities you could possibly need for a fun-filled or simply relaxed holiday, and some that you wouldn't even have thought you needed.

Whether its just a one-night stopover or a two-week holiday, every minute of your stay is well catered for, whether it's a camel race in Abu Dhabi, shopping in Dubai's gold souk or simply lounging by your hotel pool, the UAE goes that extra mile.

Emirati cuisine relies heavily on the use of fish, meat and rice and dishes are largely made up of a combination of these. Some of the most popular Emirati dishes and ingredients include:

Shawarma - consisting of marinated chicken or lamb that has been slowly cooked on a spit and wrapped in Arabic bread, with salad, tomatoes and tahina sauce, often found on a fast food stall.

Raqaq (flat) bread - made from soft unleavened dough that is flattened and baked on a hot iron plate.

Al Jabab bread - made with soft dough poured into a 'tabi' oven, and is cooked like a pancake on both sides.

Al-Saloona (curry) - the dish is prepared by boiling meat with onions, then adding a variety of vegetable (courgette, aubergine, onions, pepper, tomato and okra) and spices.

Al-Madrooba - consists of salt-cured fish and flour, cooked in a pot with spices. Once cooked is topped with ghee before serving.

Al-Khabeesah - a dessert made from heated flour with rose water, sugar, ghee and cardamom.

Al-Khanfaroosh - is prepared from a mixture of flour, egg, sugar, yeast, cardamom, saffron and rose water. The mixture is left to rest then divided into pieces and fried in ghee.

Muslims are prohibited from eating pork and you'll find hotels frequently have pork substitutes such as beef sausages and veal rashers on their breakfast menus. If pork is offered it will be clearly labelled.

Arabian food is great and definitely worth a try, though if you're not feeling adventurous particularly in the main cities there are many of the large American chains, such as TGI Fridays (Dubai), Hard Rock Cafe (Dubai), Pizza Hut, KFC and McDonalds, as well as first class restaurants offering cuisine from around the globe.

Licensing laws require venues serving alcohol to be attached to hotels or private clubs. It is illegal to drink in a public space or on the street.

If your visit to the UAE occurs during the month of Ramadan, when Muslims are required to fast from dawn until dusk, that respect should be shown and non-Muslims should refrain from eating and drinking in public places during the day. Hotel restaurants are open but may be hidden by black screens, while most food outlets in shopping malls are closed during this time.

Best Time to Visit: November to April with the rest of the year being hot

Here's a list of our top accommodations in the United Arab Emirates, ranked by our customer ratings and reviews. 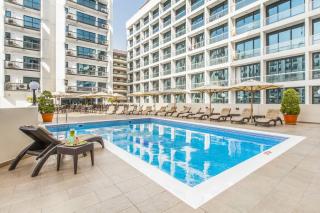 Dubai
The modern Golden Sands Hotel and Apartments is well positioned for access to many local attractions and serves as an ideal base for families and couples looking for an enjoyable break in the sun.... 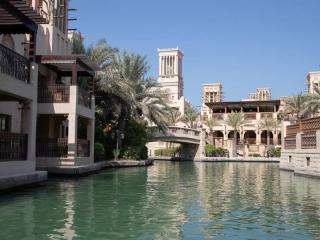 Dubai
Enjoy the facilities or simply relax at the luxurious Spa at the Dar Al Masyaf Hotel which is nestled between waterways and gardens.... 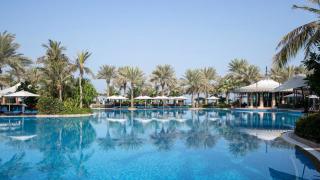 Dubai
The Al Qasr Hotel is surrounded by water, forming a virtual island with canal style waterways and a 2km wide beach.... 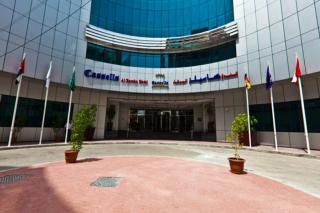 Dubai
Welcoming hotel with stylish guest rooms and suites with up to 3 bedrooms, an on-site health club, a roof-top pool and a choice of dining venues.... 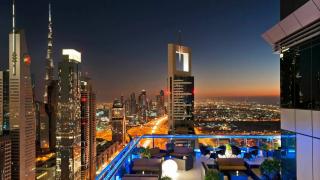 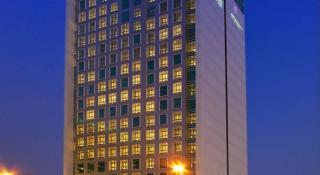 Dubai
This city business hotel offers an ideal location in the heart of Dubai's central commercial and financial district, close to the Dubai Metro. Suitable for the business or pleasure traveller this hote... 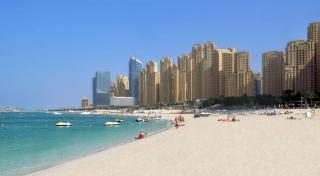 Dubai
Delta Hotels by Marriot Jumeirah Beach Dubai enjoys a beachfront setting along the The Walk with views to Palm Jumeirah. It offers stylish studios and apartments, an inspiring choice of bars and resta... 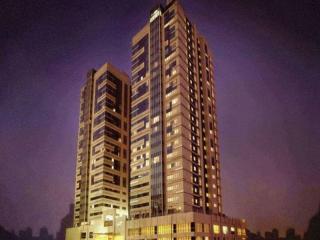 Dubai
A high standard hotel with good levels of service and all the comforts you would expect from a large hotel chain.... 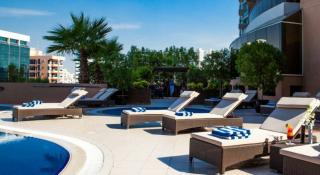 Dubai
This hotel tower offers comfortable accommodation, fine furnishings and a great choice of facilities; ideal for those looking for a convenient base to explore this area of the city.... 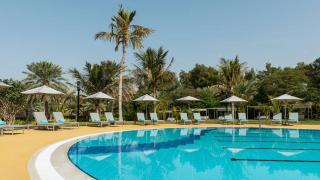 Dubai
Situated along the golden sands of the famous Jumeira strip, catering to the needs of both business and leisure travellers looking for a high degree of personalised service and touch of luxury....