Would You Support an Airport Alcohol Ban?

Whether it's a stiff drink to calm your nerves before a flight, or a few glasses of wine or pints to get into the holiday spirit, plenty of people indulge in a few alcoholic beverages at the airport.

Since the aviation minster Lord Ahmed announced back in July that he had plans to review the way alcohol was sold at airports, perhaps hinting at some restrictions being introduced, there's been a lot of speculation surrounding what might happen. 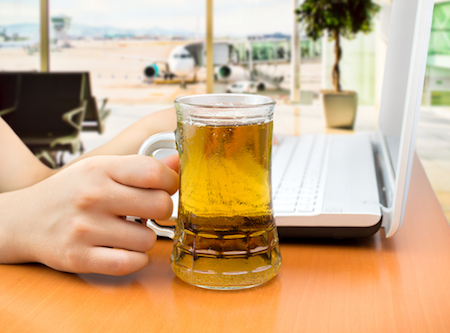 Naturally, we wondered how people would react to changes of this sort and whether people would be in support of a clamp down on alcohol sales, or very against the idea. We polled 3,006 people aged 18 and over from all around the UK and asked them questions about their own experiences of drinking alcohol at airports or on flights (if any)... and what their opinions on the matter were. None of the respondents were teetotal in order to avoid bias, with all of them stating prior to our poll that they drank alcohol.

We asked all respondents if they thought a ban on alcohol sales in airports and onboard flights would be a good idea, to which 19% said 'yes'. These people were asked to explain the reasons behind their decision, to which 55% said it was because a ban on alcohol 'would reduce drunken behaviour on flights'. 28% of the total respondents told us that they had previously witnessed "alcohol-fuelled incidents" at an airport or on a flight.

63% of the total respondents said that they themselves had become drunk in an airport or on a flight in the past and, when asked why they chose to drink alcohol in this environment, the top answers were as follows:

1. To get into the holiday spirit before/whilst travelling - 62%

Asked if they'd ever been turned away at a boarding gate for being too intoxicated to fly, only 7 respondents said that this had happened to them. However, 9% admitted to us that they had been confronted mid-flight by airline staff due to their own alcohol-fuelled behaviour.

71% of the respondents felt that no changes were necessary when it came to the sale of alcohol in airports or on flights, but 8% felt that putting alcohol limits in place for each passenger travelling through the airport or on a flight would be a 'good idea'.

It's unlikely that alcohol sales in airports or on flights would make a huge difference in terms of the number of incidents that occur when passengers are intoxicated. For one thing, they could just drink heavily before entering the airport and you'd no doubt get more people trying to smuggle alcohol through security, which wouldn't be ideal for anyone!

Airline staff at the boarding gates can turn people away if they feel they aren't fit to fly because of the state they've got themselves into through boozing and I think that works perfectly well in terms of policing the issue.
Trustpilot
ATOL Protected
£1 Hotel deposits
£30pp Holiday deposits