Would You Holiday With Your Work Mates?

Picking who you'll be going on holiday with isn't always an easy task. As much as you love your friends and family, the idea of their 24/7 company for a week or two could make you feel a bit dubious about booking a break with them.

So how about your work colleagues then; would you go away with them? Our places of work are where we often end up meeting some of our closest friends, because we spend so much time with our colleagues.

We surveyed 2,187 people aged 21 and over from around the UK, all in full time employment, and asked them about holidays they had taken over the last three years. 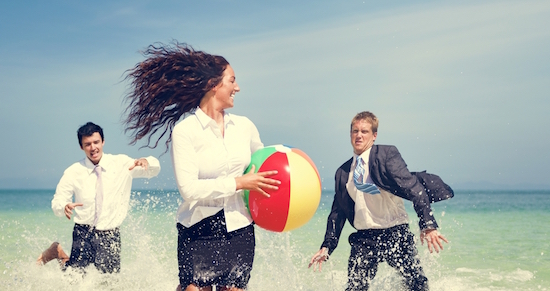 29% of Workers Have Been on Holiday With a Colleague

When we asked, 'In the last three years, have you been away on holiday with a colleague (i.e. someone that you work with)?' 29% of the respondents said 'yes'. These people were asked what industry they worked in at the time of the holiday they went on with a colleague, which revealed that the industries in which employed Britons are most likely to go away with work mates are as follows:

When we asked where in the world they went on the holiday with their colleague(s), the top answers were Spain (14%), the Netherlands (11%) and France (10%). Respondents were asked if they knew their colleague before they started working at the place where they were employed together, to which 79% of those who had been on holiday with a work mate said 'no', and that they had met them through their job.

13% of the total respondents said that they had been asked by a colleague to go on holiday together when they didn't want to go away with them, leaving them in an awkward situation. The survey also revealed that holidays with colleagues have increased in popularity by 22% over the last three years.

As we said, people in full time employment tend to spend more time with their colleagues than even their closest friends and family members; so, it's no wonder that lasting friendships are formed and co-workers feel comfortable enough in each other's company to go away together. It was really interesting for us to take a look at within which industries employees are most likely to holiday together; clearly the social environment of the hair and beauty sector is a winning recipe for close work friendships!
Trustpilot
ATOL Protected
£1 Hotel deposits
£30pp Holiday deposits