What's Your Idea of the Dream Beach Body?

Summer is fast approaching and before we know it the beach season will have officially arrived. Some of you may have already started some kind of healthy eating plan or fitness regime to prepare for that moment when you bare all in a bikini or swimming trunks, but we wanted to know what people's idea of a dream body was, based on the members of the rich and famous they most wished they looked like.

We polled 2,794 people aged 18 and over and asked them all to share their idea of the perfect beach body. Both men and women took part in this and then our team got to work on creating what these dream bodies could look like. 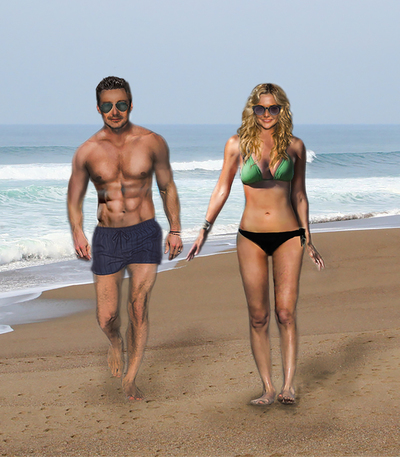 First of all, we asked the women taking part 'If you could describe the bikini body you'd most like to achieve, which celebrity's body parts/features would you most want?' We provided them with a list of answers, but they could also state their own, and they had to assign a celebrity's name next to hair, arms, stomach, chest, legs and bum. The results were:

When we asked the male respondents the same question, but asked them to assign a celebrity's name to hair, arms, abs, chest, legs and back, the results were as follows:

Men and women alike clearly have a set idea of the body they aspire to have, but there's a lot of work and commitment that needs to go into that plan if these pictures are anything to go by. What people need to remember is that celebrities often have personal training sessions every day and that it's OK if you don't look like a top model or weightlifter!
4.8 Rating 13316 Reviews
96%
reviews recommend Sunshine.co.uk
Customer satisfaction
ATOL Protected
£1 Hotel deposits
£30pp Holiday deposits