What is Your Most Embarrassing Holiday Moment?

As lovely as holidays are, the occasional scenario can pop up whilst we're abroad that leaves us as red in the face as a hot tomato.

Here at sunshine.co.uk, we spoke to 1,579 people aged 18 and over, all of whom had been on holiday abroad in the last 12 months, and asked them to anonymously share their most embarrassing holiday moments with us.

81% of the people we spoke to had an embarrassing holiday moment to share with us, but we've been through the list and picked out the top ten funniest and most embarrassing tales:

1. A man in his 30s from Birmingham was on holiday in Nice, France. Whilst there, he wanted to use some French language he had been learning and asked a waitress at a restaurant he was dining in for a straw to go in his drink, saying "Excusez-moi je voudrais une pipe?" However, he failed to realise that "une pipe" is French slang for male oral sex, not a straw, which is "paille".

2. A woman in her 50s, on holiday in Benidorm, decided to opt for a white swimsuit one day. After having worn it on the beach for the majority of the day, avoiding unusual glances from strangers, she later realised that is was totally see-through; not covering her modesty at all.

3. A man in his late 20s from Southampton was holidaying in Tenerife and, whilst at a water park on a fast slide, emerged into the drop pool completely naked in front of a large group of girls and various distraught families; having lost his trunks on the way down. He never found them. 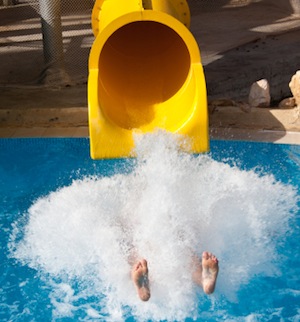 4. A woman in her 40s was on holiday in Egypt and, after having dinner from the buffet in the restaurant, very quickly began to feel unwell with suspected food poisoning. She made her way to the toilet, but whilst queuing to go in, couldn't wait any longer and disgraced herself.

5. A lady in her 20s from Yorkshire was on holiday in Morocco about to take part in a Camel Safari, but accidentally fell off her steed and straight into a pile of fresh dung.

6. An amorous couple on holiday in Mexico were mortified when a note was left in their hotel room by maids one day asking them to keep the noise of their lovemaking sessions to a minimum, because they were offending other guests, who had complained.

7. Whilst swimming in the sea in Majorca with her eyes closed, a woman in her 60s found herself red in the face after deciding to emerge from the water right between a stranger's legs; head-butting the man in his nether regions on her way up and causing him a great deal of pain.

8. A man in his 40s from Glasgow was sunbathing on a beach in Turkey when a wasp flew up his shorts. In a desperate attempt not to get stung, he jumped off his sun lounger, pulled down his shorts and threw them across the beach, forgetting the fact this move made him completely naked.

9. A man in his 20s was daydreaming on a beach in Ibiza, looking at a girl he found attractive. He couldn't hide his embarrassment when he became aroused and found it difficult to hide this fact from onlookers.

10. A 29-year-old women from Dublin was on holiday in Gran Canaria and lost track of how much alcohol she'd had to drink. Whilst in a restaurant, she started to feel woozy and stood up to head towards the toilets, but she only made it as far as the next table before being sick on someone else's dinner plate.

We can only sympathise with these holidaymakers and hope that no one else ends up going through the same level of embarrassment!
4.8 Rating 13316 Reviews
96%
reviews recommend Sunshine.co.uk
Customer satisfaction
ATOL Protected
£1 Hotel deposits
£30pp Holiday deposits