Do you have any superstitions when it comes to travelling and going on your holidays? Plenty of people do, but we wanted to find out what quirks people have to put their minds at rest when heading off on a journey.

Sometimes, when a habit is formed it can be hard to break and people often feel the need to repeat behaviours to bring them good luck or ensure a safe trip. We polled 1,894 Britons aged 18 and over, all of whom had been on a plane in the last 12 months and asked them all about their attitudes towards flying. 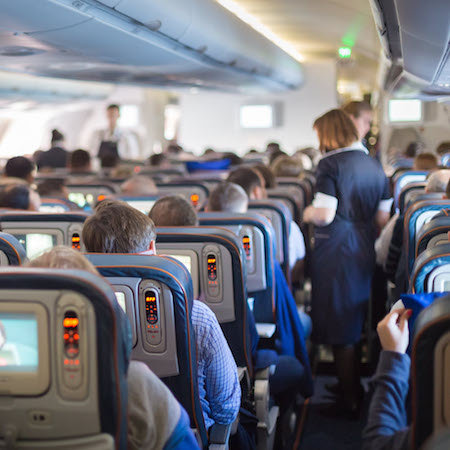 Touching Outside of Plane and Good Luck Charms Top Superstitions

When we asked, 'Do you have any superstitions when it comes to going on flights?' 65% of the people taking part in the poll said 'yes'. We then asked these people to elaborate and explain what behaviour they displayed to entertain their superstitions. We provided a list, but respondents could also state their own. The top 10 flight superstitions were subsequently revealed as follows:

1. Touching outside of plane before getting on to ensure a safe flight - 17%

6. Only flying with certain airlines - 8%

People From the South West Are Most Superstitious About Flying

The majority (21%) of those who told us that they were superstitious when it came to travelling on flights were from the South West of England; suggesting that it is the more superstitious region when it comes to travelling. When we asked all respondents if they were nervous flyers, 54% said 'no'. The majority of these people were from the North West (21%), Belfast (19%) and the South East (17%).

Anyone who took a good luck charm on a flight as part of their superstition was asked to state what form this took. The majority, 43%, said it was a 'soft toy' of some kind, whilst 27% said it was a 'piece of jewellery, e.g. a necklace'.

We all have our own habits and quirks that we carry out in all areas of life, but flying is something that seems to bring this out of us more than ever. Plenty of people feel nervous about flying and it's fine to stick to certain routines if it puts your mind at ease and allows you to have a more enjoyable flight. Flying is one of the safest ways to travel, so passengers should try to remember that and have faith in their pilot.
4.8 Rating 13316 Reviews
96%
reviews recommend Sunshine.co.uk
Customer satisfaction
ATOL Protected
£1 Hotel deposits
£30pp Holiday deposits