Tipping On Holiday - Who Gets Your Gratitude?

People have very different opinions when it comes to tipping. Some always do it no matter what kind of service they have (or, rather, haven't) received, but others will only leave a tip if they feel the person who'd be on the receiving end of the token of their thanks did enough to deserve it.

The whole custom of tipping can be confusing enough; is it 10%, 15%, 20%? When you're abroad, it all gets even more confusing; with different countries having different expectations of customers when it comes to the tips they leave. 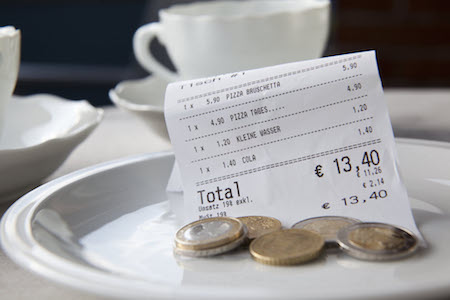 We polled 2,164 people aged 18 and over from around the UK and all of them had been on holiday abroad in the last 12 months. We asked them about tips they'd left on holiday - if at all - and what their thoughts were on the matter.

Holidaymakers Most Likely To Tip Waiting Staff, But Taxi Drivers and Housekeeping Staff Lose Out

When we showed the lovely people taking part in our poll a list of workers that they may have encountered during their last holiday and asked them whether they left tips for the people in question, our results were as follows:

1. Waiting staff - 65% (of people said they tipped on their last holiday)

One Third Of People Don't Tip On Holiday At All

Of all the respondents taking part in our research, 34% confessed that they didn't tip when they were on holiday at all. When we asked why this was the case, 64% of them shared the opinion that they 'shouldn't have to tip someone when they're paid to do their job'. It's worth bearing in mind that many of the workers you encounter whilst on holiday abroad may not be paid a very food wage, so could rely on their tips to get by financially. 11% admitted that their lack of tipping was usually just a case of them 'forgetting' - maybe after one too many cocktails, perhaps? - whilst 8% said that they were trying to 'save money' by not tipping.

We asked anyone who did leave tips during their last holiday abroad to estimate how much money, in total, they'd spent tipping over the course of their entire trip. When all answers were taken into account, the average amount equated to ÃÂÃÂÃÂÃÂ£56 per seven night holiday.

People From Yorkshire Least Likely To Leave Tips On Holiday

If you're not sure what's the "done thing" when it comes to tipping, it's worth checking out the local tipping etiquette of the country you're visiting before you go, which you can normally find online, so that you don't end up in any embarrassing situations or offending any staff. At the end of the day, it's all a matter of personal opinion, but it'll certainly help if you at least know what's expected.
Trustpilot
ATOL Protected
£1 Hotel deposits
£30pp Holiday deposits