If you're one of the lucky ones who has been bought a holiday as a gift before, you'll know the sheer joy of that feeling. We wanted to know how popular such thoughtfulness was and so, in our latest poll, we spoke to 1,891 people aged 18 and over from around the UK and asked them questions about this generous gift trend.

Everyone we spoke to was asked questions about the gifts they'd bought for people in the last 12 month and all respondents were in relationships. 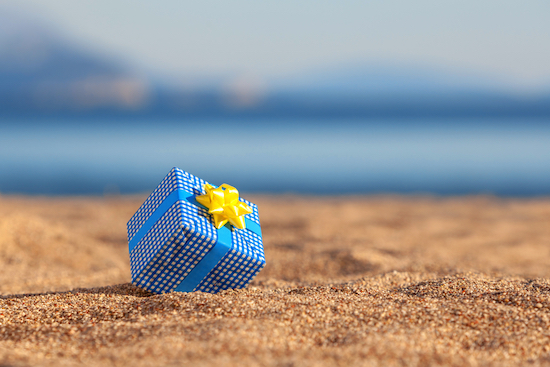 33% Have Bought a Holiday as a Gift For Someone

When we asked 'Have you ever purchased a holiday/trip as a gift for someone?' 33% of the people taking part said 'yes'. These people were then asked who they had bought the break for, which revealed that partners (i.e. husbands/wives, boyfriends/girlfriends and significant others) were most likely to be gifted a holiday (62%). Lucky them! This was closely followed by mums and/or dads (24%) and 'friends' (11%). Anyone else feeling like they could do with some new, holiday-buying friends?

Everyone who told us that they had purchased a holiday/trip as a gift for someone was asked what the occasion had been that warranted the present, which revealed that an 'anniversary' (35%), 'birthday' (31%) and 'just because I love them' (28%) were the top reasons. How sweet!

Asked to describe the type of trip/holiday they had purchased as a gift for someone, the most common answer stated by the relevant respondents was 'a city break' (44%), closely followed by 'a beach break' (42%). The average spend on a holiday/trip bought as a gift for someone else was revealed to be &pound182.00 per person and 54% of buyers use credit/borrowing to fund the purchase.

According to our survey, 77% of those who buy a trip for somebody as a gift also go along on the break in question. Furthermore, 51% of these admitted that they only chose the location because it was somewhere they personally wanted to visit, not because the person they were buying the holiday for wanted to go.

89% of the respondents who'd bought a holiday as a gift for another person before said that it was a total surprise to the recipient of the gift.

It seems gift buying has moved on from the traditional box of chocolate and bunch of flower bundles that people are so used to. Now, partners and parents seem just as likely to unwrap a surprise trip to Paris as they are a pair of slippers. As travel becomes more affordable with so many great deals about, it's easy to see why it's an option for people to treat others to a getaway these days!
Trustpilot
ATOL Protected
£1 Hotel deposits
£30pp Holiday deposits