Pets on Tour - Would You Take Yours on Holiday?

Taking pets abroad used to be very difficult, but new processes have been put in place to make it a lot simpler. So, would you pack up your pooch and get him a passport to be able to take him away with you?

We wanted to find out how common it was for people to want to take their pets on holiday with them, so this time we polled 2,155 people aged 18 and over from around the UK, all of whom had had at least one pet for the last three years. All respondents had also been on a holiday abroad in the last 12 months. 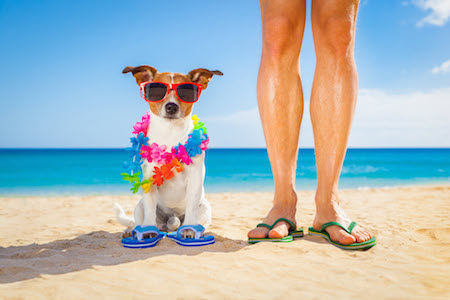 We asked these people to explain why they were planning to try and take their pet(s) abroad on holiday with them, picking all answers that applied to them, which revealed the following top five responses:

1. Don't trust people back home enough to look after the pet(s) properly - 51%

Dog Owners Most Likely To Want To Take Their Pets Abroad

Anyone who told us that they were planning to take their pets abroad on holiday with them this year was asked what kind of pet(s) they had. More than three quarters (76%) had a dog and 16% had a cat. When asked where they thought they might go on a holiday with their pets, 98% of the relevant respondents said 'within Europe'.

Those who said they would be trying to take their pet(s) abroad on holiday with them in 2016 were asked if they'd looked into what would be required for them to be able to do so. The majority, 53%, said 'no'. Of all the respondents taking part, 47% had previously taken their pet(s) on a UK holiday.

If you are only going away for a week or two, the travelling could be more distressing for your pet than leaving them back home, even if you do think they'll miss your company. Leaving your pet in the safe hands of a friend or family member will enable you to go away and enjoy your holiday without having to think about your pet. If you do end up missing them too much, there's always video chat!
4.8 Rating 13316 Reviews
96%
reviews recommend Sunshine.co.uk
Customer satisfaction
ATOL Protected
£1 Hotel deposits
£30pp Holiday deposits