Sunbathing on holiday is often one of the pastimes tourists look forward to the most. After all, it's hardly as if we get the good weather here in the UK!

However, there are some people who spend so much time lying out in the sun that they spend the majority of their holiday on a sun lounger, which we think is a bit of a waste. We polled 1,925 UK adults aged 18 and over who had all been on a hot holiday abroad in the last 12 months.

We asked those people taking part about their routines on holiday and how they spent their time; particularly when it came to sunbathing. 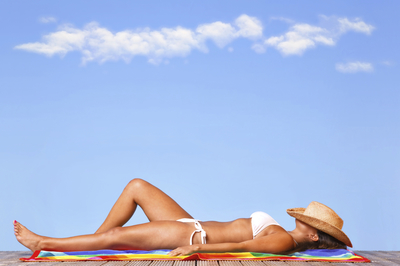 The first question put to those taking part in our research was 'How many hours, on average, did you spend lying out in the sun or exposing the majority of your body to the sun's rays during your last hot holiday abroad?' To this, we found that the average answer stated by the respondents was '7 hours' per day. Over the course of a 10 day holiday, that equates to 70 hours or almost three entire days! This is incredibly shocking.

We then asked these people about the nature of their sun exposure. 61% told us that this time was mostly spent 'actively trying to achieve a tan'. We can't help but think that this would be pretty boring! A third (33%) said that they just happened to be outdoors in the sun for this long each day.

All respondents were then asked what factor sun protection they used during their last trip.

The majority of respondents, 47% told us that 'SPF 10' was what they had opted for, despite a recommended minimum of SPF 30 for those exposing themselves to the sun's rays for prolonged periods of time. 25% told us that they used SPF 20, but 9% said they didn't use any sun protection at all. Now that's just asking for trouble! When we asked if they avoided the sun between the hours of 11am and 3pm, when the rays were at their strongest, only 11% of the respondents said 'yes'.

37% of the people taking part in our poll felt that they had suffered from some form of sunstroke during their last holiday abroad, whilst 88% admitted to getting sunburnt at some level during their last trip. Almost three quarters, 73%, of the people taking part admitted that they thought they should be more cautious in the sun than they tended to be. We certainly agree!

Not only is spending so much time in the sun on holiday very dangerous and irresponsible, it's also a waste of your trip. People need to rethink their holiday priorities and remember than heading abroad shouldn't just be about getting a tan to go home with. A vacation is the only time throughout the year when you can properly relax, without the stresses or worries of your job, housework and all the challenges everyday life throws at you.

We were appalled to see that so many people have such a lax attitude to sun exposure. Spending as many as seven hours a day exposed to harmful rays is a terrifying revelation, especially seeing as the majority of people admitted to doing this. Holidaymakers need to remember to take care of themselves during their trips oversees and step one of this has to be making sure they are sun safe.
4.8 Rating 13316 Reviews
96%
reviews recommend Sunshine.co.uk
Customer satisfaction
ATOL Protected
£1 Hotel deposits
£30pp Holiday deposits