If you've been on a holiday abroad recently that involved travelling by air, you probably didn't give much thought to how much you spent during the flight to or from your destination. However, our latest research has revealed that the average per person spend is fairly high!

We polled 2,651 people aged 18 and over from around the UK and asked them about their in-flight spend. Everyone we spoke to had been on a holiday abroad in the last 12 months which meant they had to be a passenger on a flight. 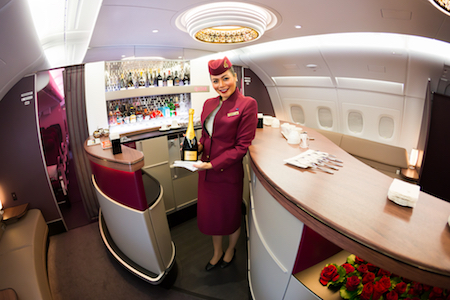 When we asked everyone taking what items they had purchased during at least one leg of a flight to or from their last holiday destination, the answers given were as follows:

We than asked all respondents to estimate how much they had spent, on average, during each leg of their flight to and from their holiday destination, which uncovered an average spend of &pound34 per person, each way, once all answers were taken into account.

During the poll, we asked respondents where they had been on holiday, so that we could determine any links between destination visited and average in-flight spend. Our study revealed that people travelling to/from America (&pound52.00), Italy (&pound49.00) and Dubai (&pound45.00) had the highest average in-flight spends.

When taking into account that a smaller commercial aircraft that carries holidaymakers to and from their destinations seats around 156 passengers, the average &pound34 spend per person could amount to as much as &pound5,304 collectively spent by all passengers on a flight.

It's always best to stock up on drinks for the journey when you're in the airport, after you're through security, because in-flight costs can be quite high. Food-wise, you can prepare some snacks or sandwiches at home before even leaving for the airport, as long as it's solid food and nothing with a high liquid content, such as soup.

Although &pound34 sounds quite high as a per passenger spend, when you think of the people who buy perfumes, makeup, gadgets or items for their travels like sun protection creams, it all starts to add up. As for on the way back, the in-flight magazine is the perfect place to buy any last minute gifts for people you might have forgotten to buy for on holiday, or to use up the last of your remaining holiday currency, so that's where the spending temptation lies!
Trustpilot
ATOL Protected
£1 Hotel deposits
£30pp Holiday deposits