Holiday Hangovers Cause 21 Hours Of Lost Time On Holiday

Holidays are about sun, sea and...well, sangria! For some people, the idea of a holiday without alcohol is an odd concept and that's because cocktails, a cold bottle or beer or a glass of fine wine often go hand in hand with beach, pool or general holiday life.

We get it; people like to have a tipple or two on holiday. One group in particular notorious for their holiday drinking habits is 18-30 years old Britons, so we wanted to find out what exactly these habits were and the impact, if any, these had on their trips. We spoke to 1,990 people aged 18-30 from up and down the UK and all of them had been lucky enough to go on holiday abroad in the last six months. 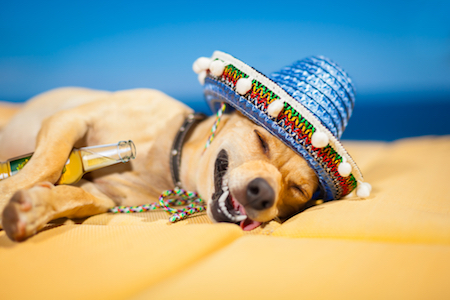 First of all, we asked everyone taking part 'Did you experience a hangover from excessive alcohol consumption during your last holiday abroad?' In total, 72% of the respondents said 'yes'. What's more, most of these people (58%) admitted to us that they had a hangover 'every day' on their last holiday abroad. We then asked the relevant respondents how much of their holiday (in hours) they had lost to being hungover and unable to function normally (i.e. get up/out and about as they normally would). Once all answers were taken into account, the average was revealed to be '21 hours' per seven day period.

When we asked about their drink of choice on holiday, 'cocktails' were revealed to be the top pick for the young adults polled; selected by 34% of the respondents. 25% told us that they were most likely to drink 'beer' on holiday, whilst 21% selected 'wine' and 16% said 'spirits/mixers'. The remaining 4% said 'other'.

25% Experience Memory Gaps on Holiday Due To Heavy Drinking

We asked everybody we spoke to if they had any gaps in their memory from their last holiday abroad due to being in a drunken state, to which a quarter, 25%, confessed that they did. Everyone taking part in the study who had drunk alcohol on their last holiday abroad was asked which drunken or hangover symptoms they'd experienced from a list provided, which revealed the following top five answers:

13% of the respondents taking part said that, during their last holiday abroad, they'd ended up having some sort of conflict with members of staff, fellow holidaymakers or someone they were travelling with as a result of alcohol consumption (i.e. an argument, fight or disagreement).

Drinking excessively is never advisable, especially in an unfamiliar place such as when you're abroad on holiday. Aside from the fact drinking can land you in dangerous situations, our study also shows that hangovers on holiday lead to so much wasted time that you could be spending relaxing and feeling great. It seems a shame to waste hours and hours of a holiday up in your hotel room with the blinds shut and a sick bucket next to the bed; that's just not how holidays should be!
4.8 Rating 13316 Reviews
96%
reviews recommend Sunshine.co.uk
Customer satisfaction
ATOL Protected
£1 Hotel deposits
£30pp Holiday deposits