Holiday Fashion - The Good, The Bad & The Risky

It's safe to say that most people's holiday fashion choices are a bit more 'out there' than they normally would be at home. Let's face it, you wouldn't exactly wear those tiny shorts to your local corner shop like you would abroad.

We wanted to find out how people's holiday wardrobes varied from their clothing collection back home. We spoke to 1,487 women aged 18 and over from around the UK for this study and asked them all about their fashion choices, particularly when they're abroad for a little R&R. 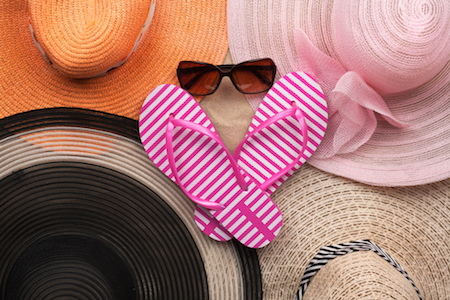 62% of Women Are More Fashion-Forward on Holiday

When we asked, 'How do your fashion choices on holiday vary from those you make when at home in the UK?' 62% of the women taking part told us that they were more 'fashion-forward' (which we described as making braver and bolder outfit choices than their norm). Almost two fifths, 39%, of the women confessed to us that their fashion choices were more 'daring/revealing' on holiday and 22% admitted that they prioritised 'comfort' more so when choosing their holiday outfits than they did back home.

Everyone taking part was asked if they cared what they looked like when they were on holiday abroad, to which 48% confessed that they didn't by stating 'no'. We asked these people to elaborate and give reasons for their nonchalant attitude, to which the overwhelming majority (77%) said it was because they weren't likely to bump into anyone they knew. Only 13% said it was because they didn't care what others thought of them.

23% of the women said that they didn't wear any make-up at all on holiday (day or night), despite 95% of these ladies claiming to wear make up every day when back home in the UK. Next, we aimed to uncover more information about what holiday trends women deemed to be the worst, so we asked respondents for their opinions.

According to the women taking part in our poll, the biggest female holiday style faux pas were revealed to be as follows:

Packing for a holiday is never easy and knowing what clothes to take can be a bit of a minefield. It's good to see that women are more adventurous with their fashion choices on holiday though and I suppose a lot of the ladies that took part in our poll had a point; you aren't likely to bump into anyone you know, so it's a good time to try out styles you're not sure if you can pull off!
4.8 Rating 13316 Reviews
96%
reviews recommend Sunshine.co.uk
Customer satisfaction
ATOL Protected
£1 Hotel deposits
£30pp Holiday deposits