Do you know your partner's holiday preferences?

It's inevitable that somebody takes charge when booking a holiday, whether it's your other half, your friend or a family member.

We started wondering how trusting people would be of their partner's ability to book a holiday that they would like. Have you ever been booked a surprise holiday that you've hated? There's always that risk if you book a break without telling someone.

We polled 1,855 UK adults and everyone taking part had been on holiday abroad in the last 12 months and was in a relationship that had lasted a minimum of one year.

Half of Britons wouldn't trust their partner to book their holiday

Of all the people we spoke to in this poll, 57% said that their last holiday abroad was a 'couple's holiday' with their partner. When we asked who had booked the holiday, we found that 81% of these trips had been booked by women and just 9% had been arranged and booked by men. The remaining 10% told us that it had been 'booked jointly' in terms of the organisation.

We discovered that half of the people taking part (52%) said that they wouldn't trust their partner to book their holiday. Of these participants, 66% were female respondents and the remaining 34% were male. When we asked them to identify what concerns they would have with the idea of their partner taking charge of a holiday booking (they were allowed to choose more than one answer from a list if needed), the top five answers were as follows:

2. Wouldn't trust them to book the standard of accommodation I'd like - 47% 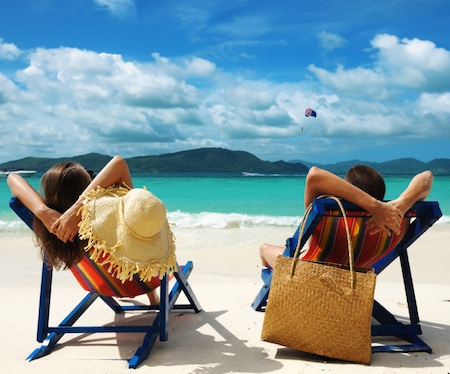 'Choosing destination' most common disagreement ahead of a couple's holiday

63% of the total respondents had previously been on a holiday abroad with the partner they were currently in a relationship with. When asked if they had argued or had disagreements with their partner about their holiday booking, 42% of the relevant respondents said 'yes'. When we asked what had sparked the argument or disagreement, the most common answer stated with 81% of the votes was 'choosing the destination'. Well, it's only natural that people will have different tastes!

The idea of going abroad on holiday is instantly exciting, especially when you know you're going to get some relaxing time away with your partner when it is a couple's holiday. People can have very different tastes and this means that there are bound to be some disagreements when it comes to choosing where to go, where to stay and what to do when you're there.

Whilst one person may love to spend their time lazing by the pool, their partner might be raring to go and want to explore their holiday destination. It's all about meeting in the middle and finding somewhere that works for both of you. Before booking, sit down and talk about what you want to get from the holiday and go from there. You should both be involved in the booking process, as that's one of the most exciting parts!
Trustpilot
ATOL Protected
£1 Hotel deposits
£30pp Holiday deposits