Some of us are a bit on the lazy side when it comes to getting our mountain of holiday laundry under control once we return home from a trip abroad, according to our latest research. Granted, it's probably the last thing people feel like doing when they're bogged down with the holiday blues, but some of you might be surprised at just how long it takes.

We spoked to 1,772 people aged 18 and over from around the UK took, all of whom had been on holiday abroad in the last 12 months and asked them questions about their unpacking habits, holiday laundry and what items they took with them during their break. Here's what we found out. 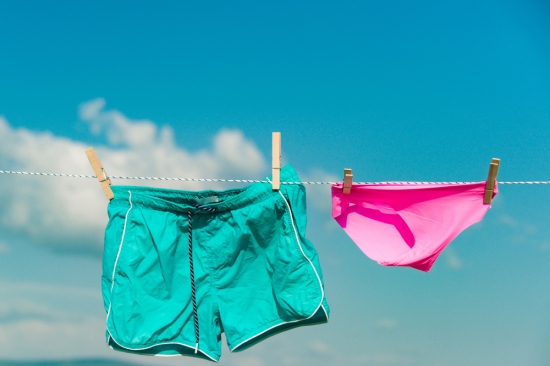 We asked all respondents 'How long after you returned home from your last holiday did it take for you to wash ALL of the dirty laundry you accumulated during the trip?' to which the average answer was revealed to be 'three months'. Anyone who told us that it took 'one month or more' was asked why they didn't get around to doing their holiday washing sooner, to which 44% said they 'prioritised other clothing' which they needed to wear more urgently. 52% said their holiday clothing had been bought purely for trips abroad and not to wear in the UK, so they wouldn't be needing it for a while.

1% of the respondents told us that they actually washed and dried some of their laundry on holiday before they'd come home; returning with clean items in their suitcase. Now that's what you call organised! Respondents who were aged 18-30 were asked if they did their own washing when they returned home from their last holiday or if their parents did it for them, to which 22% confessed it was their parents. Of these people, 78% did not actually live with their parents. What a cheeky bunch!

38% of those taking part in the study admitted that they bought certain clothing and accessories for their last holiday that they treated as 'disposable'; meaning that they threw the items away/in the bin once the trip ended. This is such a waste! The top items used in this way were 'sandals/flip flops' (31%), 'tops/t-shirts' (22%) and 'swimwear' (16%). Our advice is to pop any items like this in your suitcase up in the attic for use again on your next holiday.

When we asked how long it took them to fully unpack their suitcase after their last holiday abroad, when they'd returned home, the average length of time was revealed to be one week and three days.

We think that the 1% of people who get some of their holiday washing done before they even leave their destination are very wise indeed! Most hotels have laundry services that you can make use of for a charge and some even have laundry rooms that you can access.

As for those parents still doing their grown-up children's laundry when they return home from holiday, when they don't even live in the family home any more, they could do with saying 'no' from time to time, or else their offspring won't ever learn to stand on their own two feet!
Trustpilot
ATOL Protected
£1 Hotel deposits
£30pp Holiday deposits