Christmas Day at Home? No Thanks!

Most would associate Christmas with a time to travel to all ends of the country to visit family- with forced family socials as much as a given as mince pies and too much mulled wine. According to a new study we've conducted, though, more people than you'd think actually want to head for the hills and go abroad for Christmas Day this year- leaving the festive period well and truly behind them as they opt for sunnier climes.

To find out a little more about holidays around the festive period, we polled 1,989 Britons about their preferences when it comes to spending Christmas Day abroad. According to our results, a quarter, 26%, of us claim that we'd rather be abroad for Christmas Day this year than home in the UK. Despite so many of us wanting to be abroad, only 11% of us have actually ventured overseas for the festive day in the past! 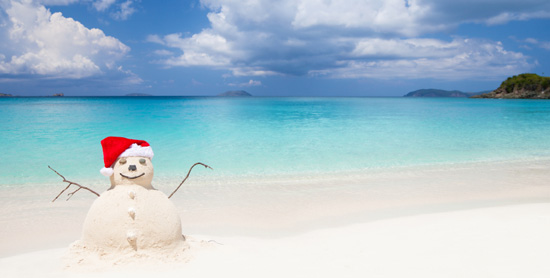 We asked those who admitted they'd like to venture abroad on Christmas Day where they'd most like to spend the festive season. The Canary Islands was revealed to be the most popular choice for 22%, followed by Lapland (17%); with Disney World in Florida coming in a close third place with 11% of the vote. The Caribbean (9%) and New York (5%) also featured in the top five - suggesting a good mix of those who'd want to escape the UK for sun or colder climes this Christmas.

'Repetition' is driving us abroad

We also asked everyone who claimed to want to spend Christmas Day abroad why this was the case. The majority, 47%, blamed Christmas in the UK feeling 'boring/ repetitive'; whereas just under a fifth, 18%, blamed the weather in the UK for wanting to get away this year. 15% said they wanted to avoid 'family politics'.

Getting away over the Christmas period is a great idea for those looking to escape the festive season, or just give themselves a well-earned winter break. There are plenty of great deals to be had as well as last-minute bargains to be snapped up, so we'd recommend anyone considering it to take the plunge. You can still take Trivial Pursuit with you, to make it feel like home!