Baby's First Holiday Abroad - When Is The Right Time?

After the arrival of a newborn, a holiday might be the last thing on your list of priorities between all the feeding, changing, burping and round-the-clock care. The thought of taking a small baby on a plane is enough to send most mums and dads running for the hills, but it doesn't need to be a scary experience.

We conducted some research into baby's first holiday abroad, to see when exactly youngsters are being taken abroad for their very first overseas holiday; and the results might surprise you. We spoke to 2,199 UK adults who'd all had their first child within the last five years. 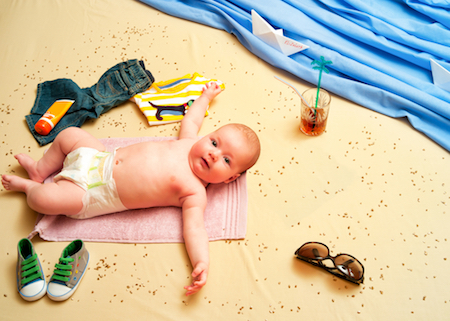 Half of New Parents Take Baby Abroad Within First Year

When we asked all respondents, 'How soon after the birth of your first child did you take your baby on holiday abroad?', the majority (53%) told us that they hadn't done so yet. However, 21% said that they had taken their newborn abroad for a holiday within a year of his/her birth. 16% had taken their baby on holiday between the ages of 1 and 3 and the remaining 10% waited until the ages of 4-5 to do so.

54% of the parents who had taken their baby on holiday abroad within a year of the birth told us that at least one of the child's grandparents had also gone on the holiday with them. Very wise indeed! 26% said that friends were present on their baby's first holiday abroad and only 20% said it was just them (the parents) and baby present.

Anyone taking part who had taken their baby on holiday abroad when they were aged 1 or under was asked how much the trip had cost them, in total, revealing an average answer of &pound2,950. Next, sunshine.co.uk wanted to find out more about the most common destinations for baby's first holiday, so the same group of people were asked where they had been.

The top five most popular destinations overseas for a baby's first holiday abroad were revealed to be:

The idea of taking a small baby on holiday, especially if a flight is involved, can be daunting. As long as you're really prepared, you can have a great holiday.

We were not surprised that many parents choose to take their child's grandparents or some friends on holiday with them for baby's first trip, because it can enable mum and dad to have a bit of down time if they're so kind as to volunteer to look after the little one!
Trustpilot
ATOL Protected
£1 Hotel deposits
£30pp Holiday deposits