Are You Guilty of Excessive Tech & Gadget Usage on Holiday

Holidays are great; everyone knows that, but are you one of those people who posts a picture of your hotel room view on Facebook as soon as you've got the keys to your room? We wouldn't be surprised if a few of your Facebook friends have clicked 'unfriend' on your profile in the past for this kind of holiday bragging!

We polled 1,858 people aged 18-30 from around the UK, each of whom had been on a holiday abroad in the last 12 months and had taken at least one form of technology with them. 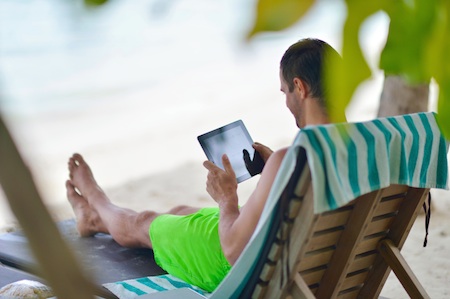 89% of young adult Britons take their mobile phone on holiday

Did you pack your mobile phone last time you went abroad on holiday? Well, 89% of the people we spoke to told us that they had done so. Furthermore, 39% packed a tablet device, a quarter (26%) took an e-reader of some kind and 11% took a laptop with them.

We then wanted to delve a little deeper and find out about social media usage on holiday. Over half of the people we spoke to (57%) said that they updated Facebook whilst on holiday. When asked how many times they had updated their status during their trip, the average answer stated was '10' times. That's more than once a day!

When we asked the same question, but in relation to tweeting rather than posting on Facebook, 41% of the holidaymakers stated that they had accessed their Twitter account while abroad, with an average of '4' tweets posted per user while on holiday.

67% of the holidaymakers told us that they had sent texts when on holiday and, when we asked how many messages they had sent, the average answer stated by those taking part was '23' text messages. When asked how many times they had updated their Instagram account, if they had one, the average answer was 'twice' over the course of the holiday. 46% of the respondents said they'd used Instagram while on holiday.

We asked the respondents who confessed to using technology or gadgets whilst abroad what their main motivation for this was, revealing 'to stay in the loop with everything back home in the UK' as the most popular answer (41%) and 'to brag about my holiday' as a close second (32%). Like we said, it's hard not to brag about your holiday to your friends and followers, but people should try to resist accessing their social media accounts from their sun loungers or else they risk spending more time on their gadgets than they do relaxing!

Half of holidaymakers access the internet daily whilst away

51% of the people taking part in our poll told us that they accessed the internet 'every day' during their holiday. Holidays should not be about updating your Facebook every five minutes or scrolling through your Twitter feed to see what's happening in the office or back home. Holidaymakers must get a little bit of distance between themselves and their gadgets; leaving them in the drawer at home is a good start!

An e-reader is a great addition to any holiday, but a constantly bleeping smartphone or a laptop feeding through a string of work-related emails is not! Make the decision to leave most of your gadgets behind and you can just tell everyone how great your holiday was once you get home. They don't need a constant update about your holiday, as much as you'd love to brag about cocktail hour around the pool.
4.8 Rating 13316 Reviews
96%
reviews recommend Sunshine.co.uk
Customer satisfaction
ATOL Protected
£1 Hotel deposits
£30pp Holiday deposits