Are you guilty of being a tag-along tourist?

Have you ever made friends with another family whilst on holiday abroad and then, no matter how hard you tried to, not been able to avoid or get rid of them?

Our latest research aimed to find out more about this 'tag-along' tourist trend. We polled 1,792 UK adults and everyone we spoke to had been on holiday abroad in the past 12 months.

When we asked, 'Have you ever been on a holiday where people you didn't previously know before the trip befriended you and wouldn't give you your own space for the majority of your time away?' a fifth of those taking part, 21%, admitted that they had experienced this type of 'tag-along tourist'. 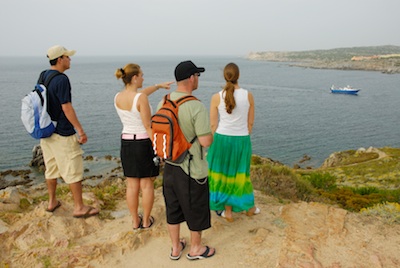 What's even worse is that 86% of these people claimed to have dropped hints to these 'tag-along tourists' to try and get some time away from them, but couldn't!

When asked the reasons why they thought these 'tag-along tourists' wouldn't give them their own space during their holiday, the top reasons that we were given were as follows:

2. They seemed bored and wanted other company - 24%

5. We mistakenly made conversation with them first - 8%

1 in 10 guilty of being a 'tag-along' tourist themselves

However, when we asked if they themselves had ever been guilty of being a 'tag-along tourist' whilst on holiday, in the sense that they wanted to spend most of their time with people they didn't previously know before the trip; 1 in 10, 11%, admitted that they probably had been. Hmm, we smell a hypocrite or two!

If they had experienced tag-along tourists attaching themselves to their own holiday party, respondents were asked where these people had been from (if they could remember). According to the poll, tag-along tourists that impose on other people's holidays were most likely to come from the North of the UK, closely followed by the South West.

If you ever experience a tag-along tourist on holiday, we'd recommend making your excuses or trying to go on an excursion or two to get as far away or possible!
Trustpilot
ATOL Protected
£1 Hotel deposits
£30pp Holiday deposits