Are You More or Less Attractive on Holiday?

If you've ever felt more attractive whilst on holiday, your partner may have thought you looked better too. Or, perhaps they thought you looked worse than usual because you weren't taking care of yourself like you normally would.

In our latest poll of 2,364 women aged 18 and over, we asked how holidays affected how attracted they were to their other half. Everyone we spoke to was in a relationship and had been on holiday with their partner in the last 12 months. 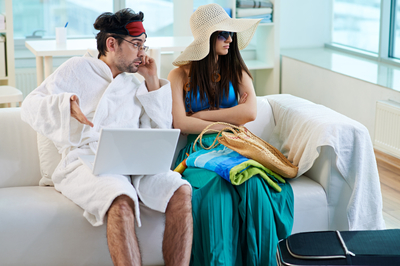 41% of women are 'more attracted' to their partner on holiday

So, we asked the relevant respondents to explain why they were less attracted to their partner on the holiday. We gave them a list of answers and told them that they could select more than one if they wanted to, which revealed the following top five answers:

32% of women are 'less attracted' to their partner on holiday

Those who indicated that they found their partner more attractive were also asked to give reasons behind the change in their attractions, to which we were given these top five answers:

1. They take better care of themselves on holiday - 56%

If you've never been on holiday with a partner before, it can be quite daunting knowing that you're going to be with them 24/7... especially if you aren't used to living together. People are generally more relaxed on holiday, so bad habits can emerge which may be off-putting, but people should just enjoy being together. If, by the end of the holiday, you're feeling more unsure about your partner than when you set off, it's probably time to call it a day!
Trustpilot
ATOL Protected
£1 Hotel deposits
£30pp Holiday deposits