Every year, songs are labelled 'summer song of the year' and whilst we've all heard certain songs throughout the summer months, we wanted to determine what Britons considered to be the top songs of the year.

In order to do so, we ran a survey with 2,177 Britons - all who stated they were 18 year and over and had been on holiday abroad throughout June, July or August for either 7, 10 or 14 nights. 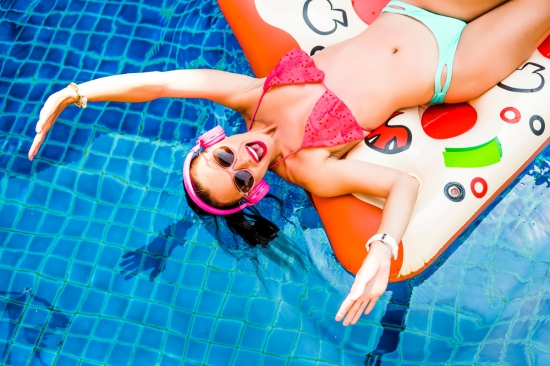 The first thing that we asked everyone taking part in our survey was to list the songs they'd heard the most during their holiday. We gave them a list of biggest current songs during the summer months and asked them to select the most heard. The top 10 was revealed as:

Both DJ Khaled and Katy Perry provided the most summer hits for the year, both featuring twice in the top 10.

3 in 5 Listen To Their Own Music

As well as listening to the music being played by hotels, resorts, shops and bars, we asked all respondents if they listened to songs on a personal device (i.e. a mobile phone or MP3 player), with 58% stating that yes they did, for an average of 3 hours and 42 minutes per day.

This equates to between 26 hours and 51 hours of personal music being played throughout the duration of a 7 - 14-night holiday.

Apparently, when sunbathing (71%) and exercising (12%) are the top times to listen to music through headphones.

Music Becomes Part Of A Holiday

No matter what holiday you go on, there will always be songs that take you back and remind you of your time abroad. Some songs get overplayed by the pool, some in bars, and some even on the beach. It doesn't matter what you're doing, if you keep hearing the same song/s over and over again it'll leave an imprint in your mind and will always take you back to that holiday. So make it a good one and make sure the memories are good.
Trustpilot
ATOL Protected
£1 Hotel deposits
£30pp Holiday deposits