You Might Be A Holiday Crasher Without Even Realising!

Everyone's heard of gatecrashers at parties, weddings or other social events that they may not have been invited to, but have you ever heard of such a thing as a holiday crasher? Well, you have now! These are essentially people who catch wind of your upcoming holiday plans and immediately decide they're coming along with you, whether you like or not.

Have you ever done this? Forcing an invite on someone's holiday isn't the best travel etiquette but, let's be honest, we can see why it's tempting sometimes. A friend tells you they're going to somewhere you've always wanted to go, you have some savings... why not! 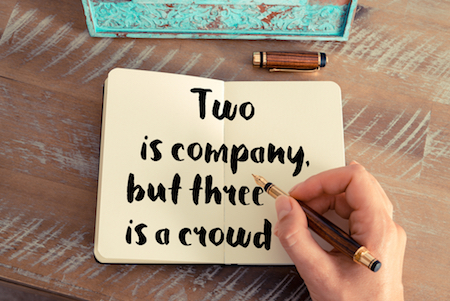 We polled 2,131 people aged 18 and over from around the UK to understand more about this holiday crasher trend - if indeed there was one at all - and asked respondents all about their experiences of the phenomenon. Everyone we spoke to had been on a holiday abroad in the last five years.

When we first of all asked, 'Have you ever been in the situation whereby someone you know has invited themselves along on your holiday abroad and ended up 'holiday-crashing'?' 38% of the respondents said 'yes'. We then asked these people how they felt about their unexpected holiday companions, to which the most common answers given were as follows:

Those respondents who told us that they'd experienced a 'holiday crasher' on a previous trip abroad were then asked who the unexpected and/or unwanted guest(s) had been. The most common answer emerged as 'friend(s)' (37%), followed by in-law(s) (22%), sibling(s) (12%) and parent(s) (8%).

54% Admit They'd Be Tempted To Be A Holiday Crasher

17% of the people taking part admitted to us that they had previously booked a holiday in secret specifically because they knew someone else would want to book to go with them, which they wanted to avoid. Furthermore, when asked if they would ever be tempted 'holiday crash' someone else's trip, 54% confessed to us that they would do so 'if the destination was appealing enough'.

13% of those who'd ended up with a 'holiday-crasher' tagging along on a previous trip abroad said that they had made a conscious effort to try and separate themselves from their unexpected co-traveller(s). Awkward! 21% of those who'd experienced a 'holiday-crasher' first hand said it had 'ruined' their trip and 9% admitted that the situation had damaged their relationship to some extent with the person guilty of 'holiday crashing'.

We think it's bad manners to invite yourself along on somebody's holiday, no matter how well you know them. For all you know, the person you're holiday crashing could really be in need of some alone time with their partner or whoever else they actually planned to travel with. Getting in the way of that is just plain awkward. If you catch wind of the fact that somebody you know is planning a trip to a place you've always wanted to visit, express your interest in that destination and see if they hint at you going along with them. It's always best to wait to be invited first, or else you risk some uncomfortable moments on your trip!
Trustpilot
ATOL Protected
£1 Hotel deposits
£30pp Holiday deposits