Where Are The Friendliest Cabin Crew Staff From?

The cabin crew on duty during your flight are all part of your holiday experience. A friendly member of staff can make your flight a much more pleasant experience, but an unfriendly manor can get your trip off to a bad start.

We wondered whether or not cabin crew staff from certain parts of the UK were seen as more friendly than others, based on their accent, so we poled 1,977 adults who had all been on at least one flight every year for the past five years. We asked the people taking part about the airline staff they had encountered on the flights they had been passengers on.

We asked the people taking part what accents some of the friendliest cabin crew staff they had encountered on previous flights had spoken with, if they could recall the accents. According to our poll, the top five accents held by the 'friendliest' cabin crew staff were revealed to be as follows:

The poll also revealed that cabin crew members with 'neutral British accents' (or RP accents) were viewed as the 'most professional' when going about their duties, according to the people that we spoke to. 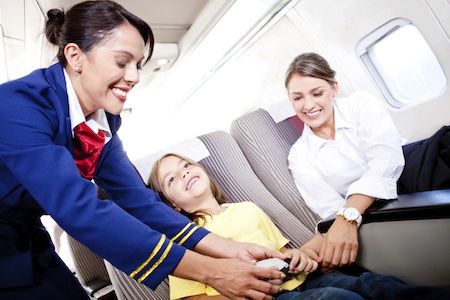 When we asked people to list the accents of any unfriendly cabin crew staff they had encountered on a flight in the past, if at all, the 'least friendly' air hostesses and stewards were revealed to have the following accents:

We already knew from previous research that people were least likely to trust a pilot with a brummie accent and so we wanted to find out more about the impact of cabin crew's accents on passengers.

At the end of the day, it's the actions and professionalism of the cabin crew that counts, not how they sound when they speak, so perhaps the people polled just had particularly good or bad experiences with staff with certain accents! Have you got an in-flight experience to share with us? Did it involve a member of cabin crew with a certain accent?
Trustpilot
ATOL Protected
£1 Hotel deposits
£30pp Holiday deposits