Trying To Save Money Leads To Spending Even More

There's absolutely nothing wrong with being frugal, looking after the pennies and wanting to get the most for your money - it's not cutting corners, it's clever spending. The more you save, the more you can have in the long run; think about it.

Holidays are just one of the sectors where shoppers try to save a few pennies, and who can blame them; haggling can get you a percentage off the cost of your holiday, a freebie thrown in, or even an upgraded experience at your chosen destination. And as the saying goes, you never know unless you ask. 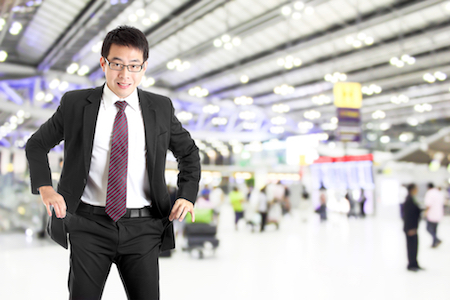 Wanting to find out where Britons try to make savings on their holidays, we ran a survey with 1,199 British holidaymakers and asked them to share their money-saving methods with us.

Firstly, we asked all those taking part in the survey if, the last time they travelled abroad, they departed from the airport that's closest to their home - which surprisingly 79% admitted that no they didn't.

It Costs &pound16 More To Use A Cheaper Airport

When asked how much further they'd had to travel to use the cheaper airport, the results showed that the average holidaymaker looking to save money would travel an extra 74 miles in order to do so.

Although, we then asked how much it had cost them to travel to the airport, as opposed to how much they'd been able to save by opting to travel from a further airport. The results of our survey showed that the average holidaymaker travelled further in a bid to save &pound52 per flight, however they typically then had to pay on average &pound68 for their travel to the airport, making it the more expensive option after all.

Flying With A Different Airport Isn't The Only Option

Finally, we asked all of the respondents what other methods they'd used in order to save money on flights, to which the most popular tricks were;

Not booking reserved seats on the fight - 41%

Think Before You Book

It really is best to think about all aspects before you go ahead and book - look at the results of this survey, for example; people were saving over &pound50 per flight and, no doubt, they were chuffed with themselves for making a good saving, but they hadn't then taken the additional travel into account, meaning they spent more in the long run.

There are plenty of ways to make potential savings; it's all about shopping around, compromising and being flexible. And remember, just because something looks good on paper, doesn't mean there aren't hidden costs.
Trustpilot
ATOL Protected
£1 Hotel deposits
£30pp Holiday deposits