The World Map According To Britons

How good do you consider your geographical knowledge to be? Fairly average? Exemplary? Well, it's a big old world out there and there's a lot to learn.

A few years back, in 2011, we carried out a poll which revealed that half of UK adults couldn't point out their last holiday destination on a map. Four years on, we wanted to see if this knowledge had improved. We spoke to a different sample of people - 2,189 in total - all of whom were aged 18 and over from around the UK, and asked them questions about where certain countries were in the world. 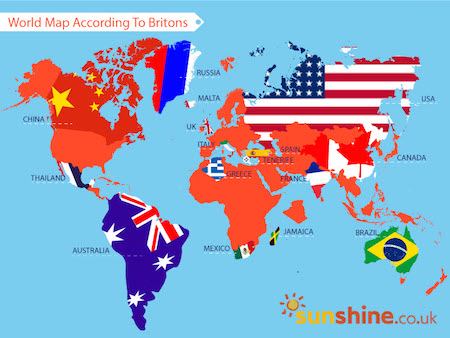 In our research, only two destinations were correctly identified by the overwhelming majority (more than 90%) of people taking part in terms of the correct places on the map; the United Kingdom and Italy. We put this down to the distinguishable shapes of both places, with Italy identified from its boot-like shape and the UK a familiar outline for its residents.

When we asked respondents to identify countries on a blank world map outline, Australia was most commonly mistakenly thought to be located on the mass of land that is actually made up of Brazil, Peru, Chile, Argentina and other South American countries (22% of people thought this). Canada was most mistaken for China; something which 29% of people incorrectly agreed upon.

33% Confuse Australia For Brazil and 26% Thought Crete Was Tenerife

23% of people placed Mexico on the map where South Africa actually is and 31% mistakenly thought that Algeria was Greece. Furthermore 33% of the respondents mistakenly thought that Australia was in fact Brazil and 25% thought that Spain was located where Turkey really is on the map. Crete was most frequently incorrectly identified as Tenerife (26%) and Greenland, to the north west of the UK, was thought by 18% of people to be Russia. Iceland was most commonly incorrectly labelled as Malta (by 24% of people in total).

The world that we live in is hardly a small place, so it's very understandable that some people won't know where certain countries can be found on the map. Unless you've studied a globe or been taught the lay of the land, it can be difficult to get your head around.

When it comes to holidays though, it's nice to know where you're heading and where you are in relation to your home turf. If you're ever on a flight that has a moving map available, take a quick look and you might pick up some handy geographical knowledge along the way!
4.8 Rating 13316 Reviews
97%
reviews recommend Sunshine.co.uk
Customer satisfaction
ATOL Protected
£1 Hotel deposits
£20pp Holiday deposits