We've had a lot of fun doing our latest opinion poll, because it all surrounds cocktails! We polled a whopping 3,270 people aged 18 and over from around the UK, all of whom had been on a holiday abroad in the last two years, to find out more about how tastes vary around the UK. There were an equal number of people participating from each of the 12 UK regions, in order for our team to pick up on any regional trends, and we asked respondents questions about their drinking habits both at home and on holiday. 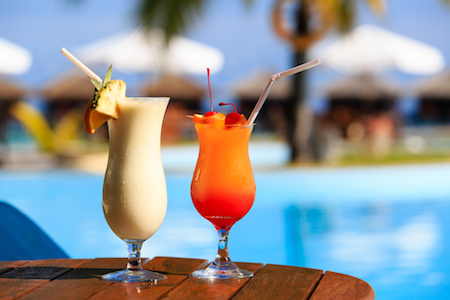 Take a look at the results below and see if your preferred cocktail is the typical choice in the region that you live in!

South West - Sex on the Beach

Only two regions, the East of England and London, selected the same favourite cocktail; with the Mojito coming top of the popularity list in both areas. 78% of the respondents taking part in the poll said that they'd tried their first ever cocktail whilst they were on a holiday abroad.

29% of Britons Have Become Sick From One Too Many Cocktails!

42% of the people polled told us that they drank a cocktail "daily" on their last holiday abroad, whilst 29% of the respondents said that they had become sick from drinking too many cocktails before.

Cocktails have become synonymous with beach and pool holidays abroad, so we wanted to find out what were the favourites of people living in different regions of the UK. We were surprised just how different people's tastes were, with only two regions having the same favourite cocktail.

We think cocktails have become so popular here in the UK because they remind people of fonder times spent relaxing or partying on holiday! What's your favourite cocktail?
Trustpilot
ATOL Protected
£1 Hotel deposits
£30pp Holiday deposits