The Impact of Holidays on Relationships: Revealed

If you're in a relationship and the idea of a holiday springs to mind, do you immediately conjure up images of you and your loved on strolling hand in hand along a deserted beach, or are you more of the girls'/lads' holiday type?

In our latest poll, we wanted to find out more about the impact of holidays on relationships. We spoke to 1,936 people (964 of whom had recently come out of a relationship that had lasted 1-2 years and 972 of whom had been in a relationship of 5 years or more... and were still in it). 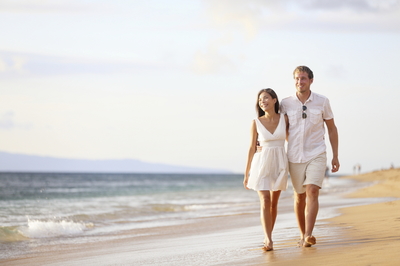 Couples Who Holiday Together Regularly Have Longer Relationships

This suggests that, if holidaying regularly, people stand a better chance of their relationship lasting longer. Anyone who had been on holiday with their current partner, or their previous partner if they were single at the time of our poll, was asked when they felt happiest in their relationships.

Half of Couples Feel Happiest When on Holiday

According to our survey, 61% of the total respondents felt that 'time apart/space' was important in a relationship; whilst 27% said that they'd spend every minute of every day with their other half if they had the opportunity to. When asked how important they felt holidays together were for relationships, 82% said 'very'.

Holidays seem to be the secret to happy, healthy relationships. Our poll suggests that regular trips away together can lead to a longer relationship, but obviously there's other work that has to go into a partnership too.

If you can spare the time and some of your savings to go on a trip somewhere with your significant other, it's definitely money well spent according to these results. We'd be interested to know people's thoughts on holidaying without your spouse when you're in a relationship! Does absence make the heart grow fonder in that case, or is that a recipe for disaster?
Trustpilot
ATOL Protected
£1 Hotel deposits
£30pp Holiday deposits