The Curse of The First Holiday – If You Visit This Destination With Your Partner First, Your Relationship Could Be Doomed!

The first holiday together as a couple is an exciting time; getting the chance to spend time with one another in sunnier climes without the stresses and strains of everyday life is definitely a treat.

But what does your choice of first holiday destination as a couple say about your relationship? It turns out, quite a lot it seems! We polled 2,187 people aged 18 and over from around the UK; 1,056 of the respondents had broken up with a partner within the last six months that they had been on holiday with during the relationship and the remaining 1,131 were in a happy relationship of three years or more (in which they'd also been on holiday with their partner). 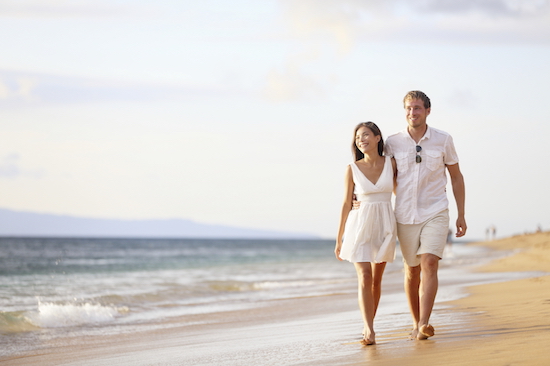 Couples Who Visit Mexico First Are Most Likely To Break Up

We asked those respondents who'd broken up with their partner where they had spent their first holiday together as a couple before they'd split with their ex; so that we could predict which destinations might spell trouble for a relationship if picked as the first place for a break together. The top five answers were as follows:

Next, those in happy relationships were asked where they'd spent their first holiday with their other half, to determine which destinations might result in happier, longer relationships if chosen as the place to holiday together as a couple for the first time. The top five results were as follows:

We asked all respondents if they'd argued with their partner (or ex-partner in the case of the set of respondents who'd had a break up) during their first holiday together, to which 73% said 'yes'. When asked what they argued about, 'running late (i.e. for the airport)' was the top answer (28%), followed by 'what to do/how to spend our time' (21%) and 'staring/ogling at other people/flirting' (20%).

Our study also revealed that the average couple goes on holiday together within five months of forming the relationship.

It's interesting there was no crossover of destinations on both lists, as this makes us think perhaps there really is some truth in this. Holidays to Mexico require a bit more of a splurge than some of the other destinations on the breakup list and Ibiza is known for its carefree-party vibes, so maybe frivolous spending and too much partying are what spells future trouble for relationships.

Those wishing to enjoy a long and lasting, happy relationship with their new partners should look at booking places like Tenerife and Italy for their first trip with their amore, if this study is anything to go by; but Mexico should definitely be avoided!
Trustpilot
ATOL Protected
£1 Hotel deposits
£30pp Holiday deposits