The British Weather is Certain to Worsen the Holiday Blues

The feeling when you have to pack up your things after a holiday abroad and return home to the UK is rarely a good one.

As you sombrely make your way through security at the airport in your chosen holiday destination, knowing that the holiday you've been looking forward for as long as you can remember is now well and truly over, you can't help but want to cry. This feeling is made 100 times worse if it's raining when you land back in the UK. 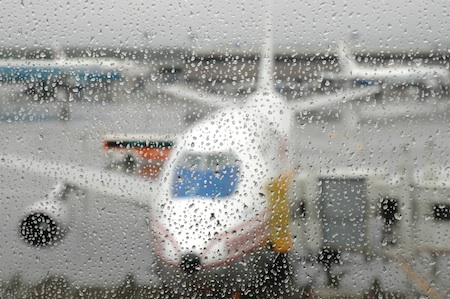 We polled 2,151 people aged 18 and over who had all been on a warm holiday abroad in the past 12 months via a flight from the UK.

Two fifths of British holidaymakers return to rain in the UK

When we asked, 'When your return flight home landed in the UK after your hot holiday abroad, was it raining?' two fifths of the people we spoke to said 'yes'. What's interesting though is that two thirds of these, 65%, said that this was despite the fact they had returned home to the UK in one of the summer months of June, July or August.

We wanted to find out where the most likely place was for people to be greeted by rain in the UK when they land. Anyone who returned to rain was asked what airport they had landed at when flying back to the UK, which revealed 'Manchester' to be the most common answer, followed by 'Glasgow'. So, if you're flying back to one of these airports, expect drizzle, grey skies and generally miserable weather.

67% of the holidaymakers we spoke to admitted that they were 'inappropriately dressed' when they landed back at a UK airport after their last hot holiday abroad, meaning that they were wearing clothes suited for their holiday but not necessarily for the British weather. 52% of these people were wearing flip flops or sandals, whilst 39% admitted to having either shorts, a skirt/short dress or shorts on. Perhaps a rain coat and Wellington boots would be a better idea!

43% of the respondents taking part told us that it had taken them time to adjust and get used to the British weather again once they had returned from their hot holiday abroad. The average adjustment time stated by those taking part was '7 days'. We know the feeling; everyone else is walking around in shorts and t-shirts because it's 20 degrees outside, but to you it feels positively Arctic because you've been basking in the glow of 35 degrees on a beach somewhere for the last week.

When you've just started to get used to the scorching heat abroad, there's nothing worse than landing back in the UK to single figure temperatures and rain, rain and more rain. It's always best to expect the worst when dressing for a flight home to the UK, meaning closed toe footwear and at least a light jacket in your hand luggage. It's not a nice thought, but no one can ever truly rely on the British weather... even in summer! Still, you could always book your next holiday right away to give yourself something to look forward to!
Trustpilot
ATOL Protected
£1 Hotel deposits
£30pp Holiday deposits