Shocking Holiday Behaviour of Men Revealed in Our Latest Poll

Everyone behaves a little differently on holiday. Perhaps it's the sangria or the sunshine, but there's certainly something in the air. However, something we discovered about what some men do on their holidays abroad was pretty shocking to say the least.

We spoke to 2,144 men aged 18 and over from around UK, each of whom told use prior to the poll starting that they'd been on a holiday abroad in the last 12 months. This study was completely anonymous, so we encouraged all the fellas taking part to be as honest as possible.

When we initially asked 'Did you ogle women you did not know whilst on your last holiday abroad?' 61% of the men taking part said 'yes'. Of those who admitted that they did, 45% were in a relationship at the time and 33% had actually been on holiday with their partner when they ogled the other women. 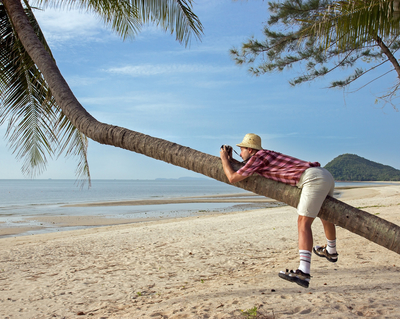 14% of the men polled confessed to us that they had previously taken sneaky/secret photos of women they did not know without their knowledge during a holiday abroad, with the 'beach' (61%) and the 'poolside' (43%) the most likely places to take these surreptitious snaps. 51% of these men were in a relationship at the time and the majority of these, 66%, had been on a holiday with their partner when they took the photos. We find this absolutely disgraceful.

32% of Secret Snappers Wanted to 'Show Mates Back Home'

When we asked those who had secretly taken pictures of women they did not know during a holiday about their behaviour and, specifically, why they had done this, the most common reason given was 'because I appreciated their beauty and wanted to remember it' (51%). 32% claimed that they wanted to show their 'mates back home'. That still doesn't make it OK.

Anyone who was in a relationship was asked how they would feel if someone secretly took images of their partner in swimwear whilst on holiday, to which three quarters (74%) said 'furious'. 11% of the men polled said they would feel 'proud'.

There's no denying that these findings are really alarming. Women should be able to relax on holiday and not have to have their wits about them 100% of the time. Men have no right to photograph scantily clad women that they do not know in secret. It's very wrong.

When we asked how men would feel if it was their wife or girlfriend in front of the camera, we found that most of them would quite rightly be furious. It made us realise that a few of those men must be very hypocritical; given that some were also guilty of photographing women in secret.
4.8 Rating 13316 Reviews
97%
reviews recommend Sunshine.co.uk
Customer satisfaction
ATOL Protected
£1 Hotel deposits
£20pp Holiday deposits