How Far You'll Fly In Your Lifetime Might Just Surprise You

When you hop on a plane to fly to your holiday destination, it may not feel like a huge distance; especially if you're staying within Europe or sticking to short haul locations. However, if you imagine how many more times you'll fly in your adult lifetime, the hours and distance soon add up.

We were intrigued about how much time we spend thousands of feet in the air as a passenger on a flight, so we did what we do best and surveyed a sample of people. This time, 2,486 people aged 22 and over from around the UK took part and we asked them questions about the travelling they had done over the past five years. 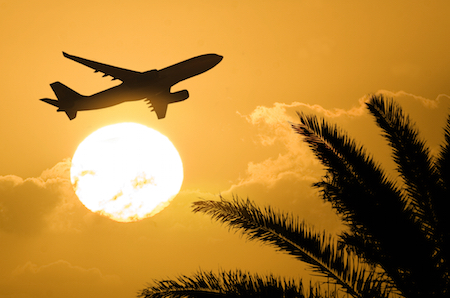 Initially, everyone taking part was asked to estimate how long they had spent on flights as a passenger over the past 5 years, including travel to and from holiday destinations (stating '0 hours' if they had not flown at all). The results revealed that the average UK adult spends 34 hours in the air on flights during the average five year period (averaging 6.8 hours per year).

We asked everyone taking part how much of their adult lifetime they thought they would 'holiday regularly' for; revealing that the majority felt that they would go away regularly until they were '63' years old. This is just below the average retirement age in the UK. When looking at a time span of 45 years from 18 to 63, the average UK adult will therefore spend at least 306 hours as a passenger on flights in their adult lifetime.

Also, looking back over the past five years, those who had flown were asked how many hours of the flights they had spent sleeping or napping, revealing an average answer of 10 out of the 34 hours they were in the air for during a five year period; or 90 hours sleeping mid-flight during their adult lifetime.

With the average Boeing 747 travelling at 565mph at cruising speed and the average Briton spending 306 hours in the air during their adult life time, this equates to 172,890 miles covered by plane; give or take a little for reduced speeds during take-off and landing. This means they will have travelled the equivalent of almost 7 times around the world, when comparing the distance to the circumference of planet Earth. Wow!

The travelling time to and from our holiday destinations soon starts to add up, particularly after a few long haul flights. When we see that we could spend as many as 12 entire days on a plane in our adult lifetime, it just goes to show how important it is to put some thought and research into your bookings; making sure you're confident in the airline's ability to deliver a comfortable experience.

We'd love to do further research into this topic, to see what people do to entertain themselves during all of these hours in the air. When a personal entertainment screen is lacking, it can be quite boring on a flight. However, there's plenty that can be done to pass the time and make the journey more enjoyable, like playing games and reading a good book!
Trustpilot
ATOL Protected
£1 Hotel deposits
£30pp Holiday deposits