Holidays on Hold for Newborns

Having a baby is an exciting time, but also a very hectic (not to mention expensive) one. So, it's understandable if holidays take a bit of a backseat when a little one makes an appearance.

How long do holidays tend to get put on hold for after the birth of a baby though? How long is an appropriate amount of time to wait before leaving them with family for a much needed escape? And if you can't bear to be without your bundle of joy, as is often the case, how young is too young for a holiday abroad? 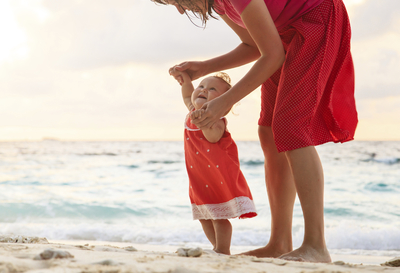 We polled 2,895 UK adults who had a child aged 8 or over; all of whom stated they had regular holidays abroad prior to having a baby. We asked them all about the holidays they had taken, if any, during their child's lifetime so far.

When we asked the people taking part 'How long after your youngest child was born did you wait until going abroad on a holiday (either with or without them)?' the average answer once all responses were taken into account was 'five years'. However, 11% of the people taking part told us that they still hadn't been on a holiday abroad since the birth of their youngest child; bearing in mind all respondents had a child who was aged 8 or over.

We then asked what their reasons had been for the length of time they had waiting before going away abroad on holiday after the birth of their youngest child, if they had already done so. We told people they could give more than one reasons and the top five answers given were revealed to be as follows:

We asked everyone the question, 'How soon after the birth of your youngest child did you feel like you needed a holiday/break away from the child?' The most common answer given (82%) was 'within three months of their birth'. Honest bunch!

The parents who had been abroad on holiday since the birth of their youngest child were asked if that had taken their child on the trip with them, or gone away without them. The majority, 52%, told us that they'd gone on the holiday without their child. When asked who had looked after their youngster during this trip, 72% said 'the child's grandparent(s)'. Well, that's what they're there for!

Many parents think it's not always feasible to go away on holiday when there's a newborn on the scene, but that doesn't have to be so. There are plenty of hotels that cater excellently for families with young children and babies, from self catering apartments to 5* hotels, so as long as you do your research then you can easily find somewhere to suit your needs.

There's nothing to say having a baby should stop you going on holiday; when you feel comfortable leaving the child for a short period of time, you can always look into mini-breaks in short-haul destinations to have a well deserved breather!
Trustpilot
ATOL Protected
£1 Hotel deposits
£30pp Holiday deposits