Does This Holiday View Look Familiar?

Sand in your smartphone case? Pool water on your tablet? Any of this sounding familiar? If so, it's probably because you're using your gadgets far too much during your holiday time. 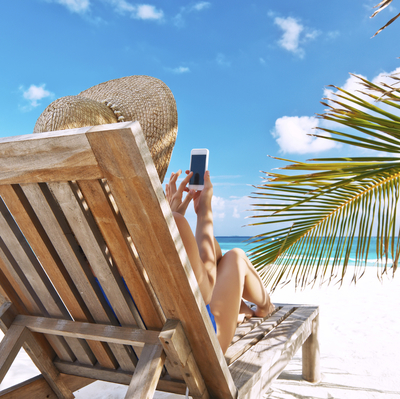 Don't get us wrong, technology does have a place on holidays, but only really in the form of e-readers and cameras. You should put a ban on anything else that will distract you from the gloriousness of holiday life.

We polled 2,187 people aged 18 and over from around the UK to find out what role technology and gadgets have on holidays. Everyone we spoke to had been overseas on holiday in the last six months and their break had lasted for at least seven days.

First of all, we asked roughly how long, per day, the participants spent immersed in technology or gadgets of some kind (excluding eReaders) whilst on their last holiday abroad. If they didn't spend any time using technology, they could select '0' hours. Once all answers were taken into account though, we found that the average answer was revealed to be '3 hours' daily.

When looking at that time over the course of the seven day break, that would equate to 21 hours in total. Yep, that's almost an entire day!

Next, we aimed to uncover what this tech time was spent on, with 'social media usage' being revealed as the most common gadget-related activity whilst on holiday (55%), followed by 'internet browsing' (27%) and 'texting/messaging' (16%).

56% of gadget-using holidaymakers regret being to engrossed in technology

Furthermore, 56% of the respondents who admitted to having used gadgets on their last holiday told us that they regretting doing so. When asked why, 66% said they could have spent the time enjoying their holiday more, whilst 32% told us that it had enabled them to dip in and out of work-related communications which didn't help them to relax. Well of course it wouldn't.

7% of the respondents taking part in our poll said that they had visited an internet cafe on their last holiday abroad. The poll also revealed that 37% of holidaymakers return home to a higher than average mobile phone bill; with &pound15.40 being revealed as the average extra charge those using their handsets abroad faced after their trip.

We've carried out various studies relating to tech usage on holiday, but we've never really looked at how much time this takes up. To see that almost one full day of a week-long holiday is wasted during a trip by people being immersed in technology is outrageous!

Sure, it can be tempting to brag to your social media friends about your hotel room view or your tan, but all that can wait until you get home. As for those work emails or excessive texts to people back home, those can wait as well. Holidays are the perfect chance to ditch your gadgets and remember what real life interactions are like, so step away from the smartphone!
Trustpilot
ATOL Protected
£1 Hotel deposits
£30pp Holiday deposits