British Couples Have Less Sex on Holiday Than at Home

During previous research that we've carried, all signs have point to a more, shall we say, active love life when it comes to holidays, but our latest research has shown quite the opposite. We polled 1,422 people aged 18 and over from around the UK, all of whom were in a co-habiting relationship, to find out more about their holiday love lives. Everyone we spoke to had been on a 14 night holiday with their current partner at least once in the last year.

1 in 5 Couples Don't Have Sex At All on Holiday

All respondents were initially asked 'During your most recent two week holiday, how many times did you have sex with your partner?' to which the average answer (once all respondents were taken into account) was revealed to be 'once'. Just over a fifth - 21% - of the respondents said they didn't have sex at all with their partner during their two week break.

However, when asked the same question but in relation to their home life, the respondents admitted to us that they had sex, on average, once a week; meaning that they were making love half as much on holiday as they did at home. 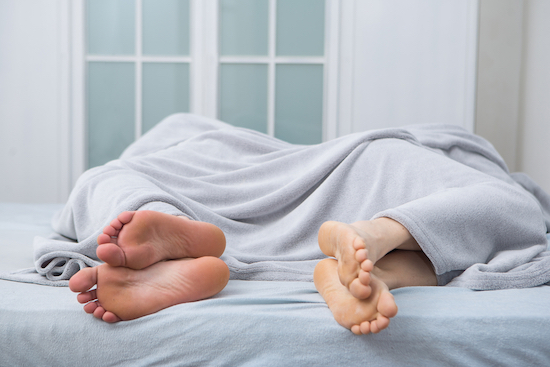 Children, Warm Temperatures and Sunburn Most Likely to Get In The Way of Romance

Next, anyone who confessed to having sex less frequently on their holiday with their partner than they did at home was asked to explain the reasons behind this. They were able to select all applicable answers from a list provided, or state their own if their reason(s) did not appear. The top reasons were revealed as follows:

4. Concerned about other hotel/accommodation guests overhearing - 19%

5. Concerned about housekeeping staff walking in - 16%

34% of the respondents taking part also confessed to arguing more frequently with their partner on holiday than they did at home; with the top reasons for this revealed as 'disagreeing about how to spend time' (21%) and 'stress of travelling' (18%). Finally, when we asked if their partner was their favourite person to go on holiday with, 56% of the people taking part said 'no'. Ouch!

Clearly, holidays just don't put some people in the mood. It can be difficult for couples to be intimate if there are little ones close-by, which is why adjoining rooms or apartments with separate bedrooms can be best for families, rather than just one big room where everyone bunks together!
Trustpilot
ATOL Protected
£1 Hotel deposits
£30pp Holiday deposits